relentless044 said:
206k
oil gets changed when it doesn't mean a shortage of busch lite, using only supertech 20w50
Click to expand...

I change mine every 3k or 6 months. I've put maybe 500 miles on the X since the last change, and that was back in November, I think. I'd have to look at the sticker.

So, with the plan being to do the Idaho BDR next year, there's going to need to be some prep work done before we tackle it.

We will be taking the trailer, and towing it with the X. Knowing that mpgs are already pretty terrible, I'll need to carry more fuel. I will also need to get the tow hitch on (already have it, just need to install it), run a 3 way Anderson for the DC charger in the trailer, install either an add-a-leaf or new springs to accommodate the extra weight on the rear end, do the timing belt, and swap the radiator for a 1.25 in thick SC radiator. I also need to change the brake fluids, diff oil, transmission fluid, and transfer case fluid.

I should probably go ahead and make sure the brakes are in top notch shape while I'm at it. They work great, but I don't know when they were last done prior to purchase.

There might be other things that get done or purchased, but these are the MUST do items prior to the trip.

Lots to do in the next year!

I've been dealing with some pretty severe pain the last few days, but managed to get my plano boxes mounted to the crossbars of my rack. 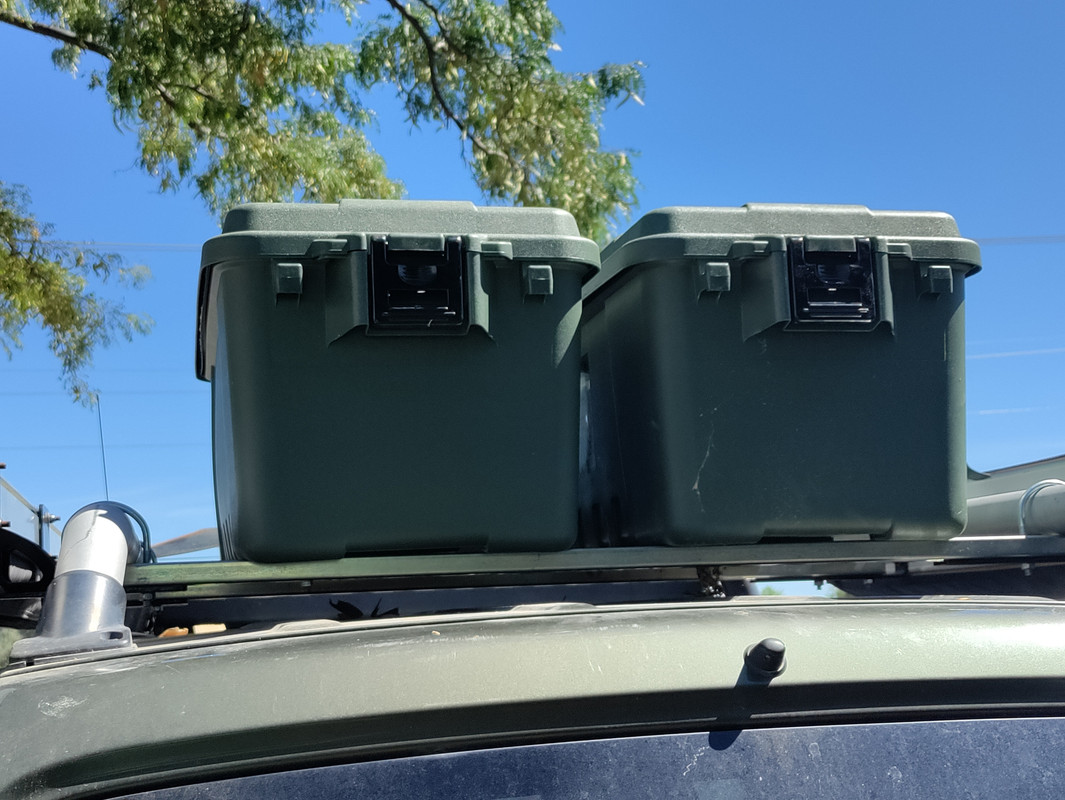 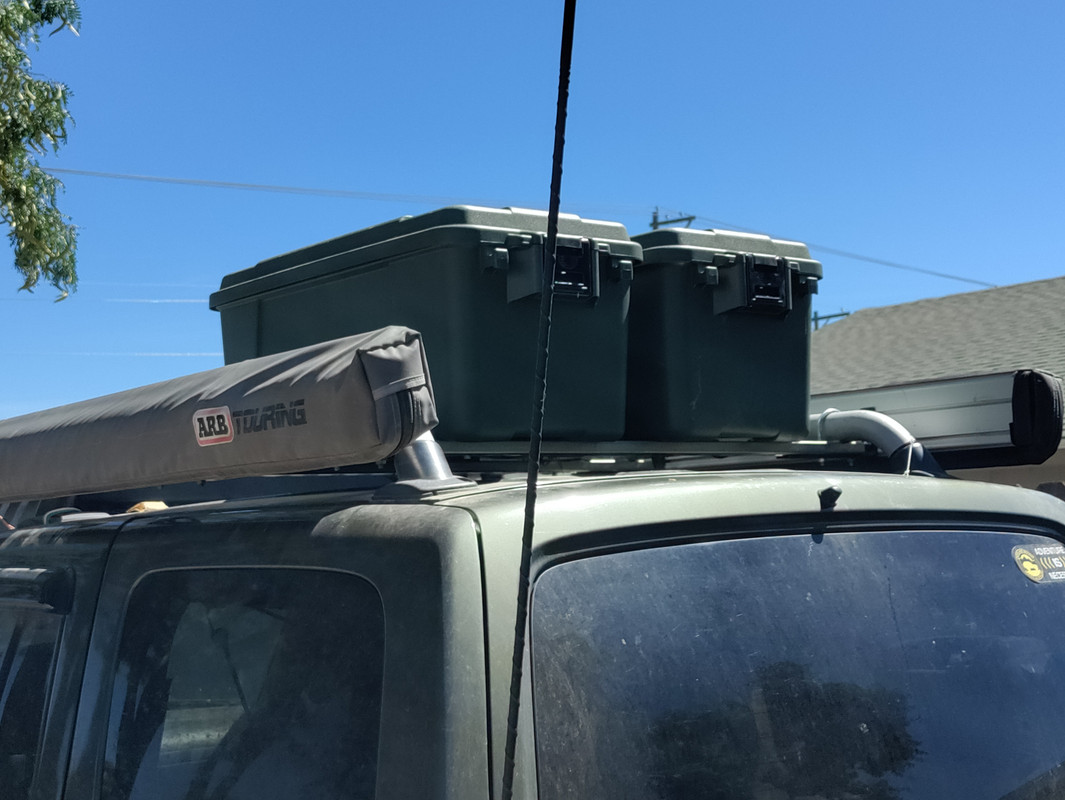 They're mounted using 4 12mm bolts for each box. There's a piece of 1/2in plywood in the bottom as well. Bolt goes through the plywood, through the box, and into a spring channel nut in the superstrut crossbar.

I've begun ordering parts for the next stage of upgrades, in preparation for doing a 10 day trip on the Idaho bdr next year.

Sometime in late October, we'll be doing the following:

6. Installing 4x4 Parts 3 leaf add-a-leafs packs
7. Cut and install a new superstrut cross bar, and mount my aluminum toolbox to the two front bars.
8. Build and install a 3-pin anderson harness to charge the battery in the trailer installed 9.19.22

I forgot to mention.... My stereo doesn't want to turn on at all. Checked fuses, and can't seem to find any blown. Maybe it just died.

I've wanted to upgrade to a Bluetooth capable radio for a while. I'm debating on going with a cheaper Bluetooth stereo, or spending a little bit on an android auto head unit...

reaver said:
I forgot to mention.... My stereo doesn't want to turn on at all. Checked fuses, and can't seem to find any blown. Maybe it just died.

I've wanted to upgrade to a Bluetooth capable radio for a while. I'm debating on going with a cheaper Bluetooth stereo, or spending a little bit on an android auto head unit...
Click to expand...

I replaced my stereo with a boss audio 508uab. It's a basic single din unit with aux input and Bluetooth. So now I have tunes again!

I've got 25 feet of 8awg welding wire in red and black coming today. As well as my 30a breaker, and 8awg anderson contacts.

Sunday, my buddy and I will build the harness for the the DC-DC charger in the trailer, mount my auxiliary backup lights, and install the tow hitch.

If we have time, we might even run new wires for my bumper light bar, as the way it's setup now, it gets power from the auxiliary relay box, but grounds at the starter battery.

This works when I'm not running the dual battery setup in the X, but it doesn't work once I've plugged in the second battery.

Made some progress today!

Step one was to install the tow hitch. 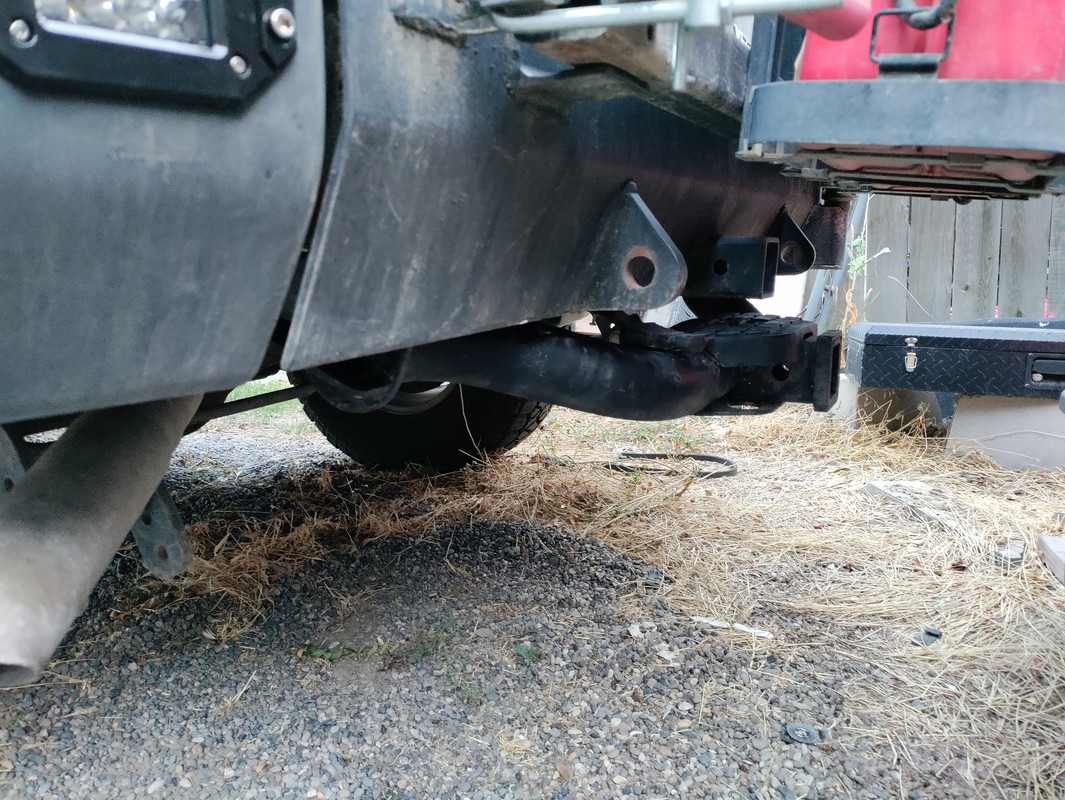 Didn't have bolts, so off to the hardware store we went to get m12 grade 10.9 bolts. $52 worth of bolts, washers and nuts later the hitch was on.

Next up was to install the new auxiliary backup lights in the plastic caps. We used an oscillating cutter and a template, and managed to do it without even having to take them off. 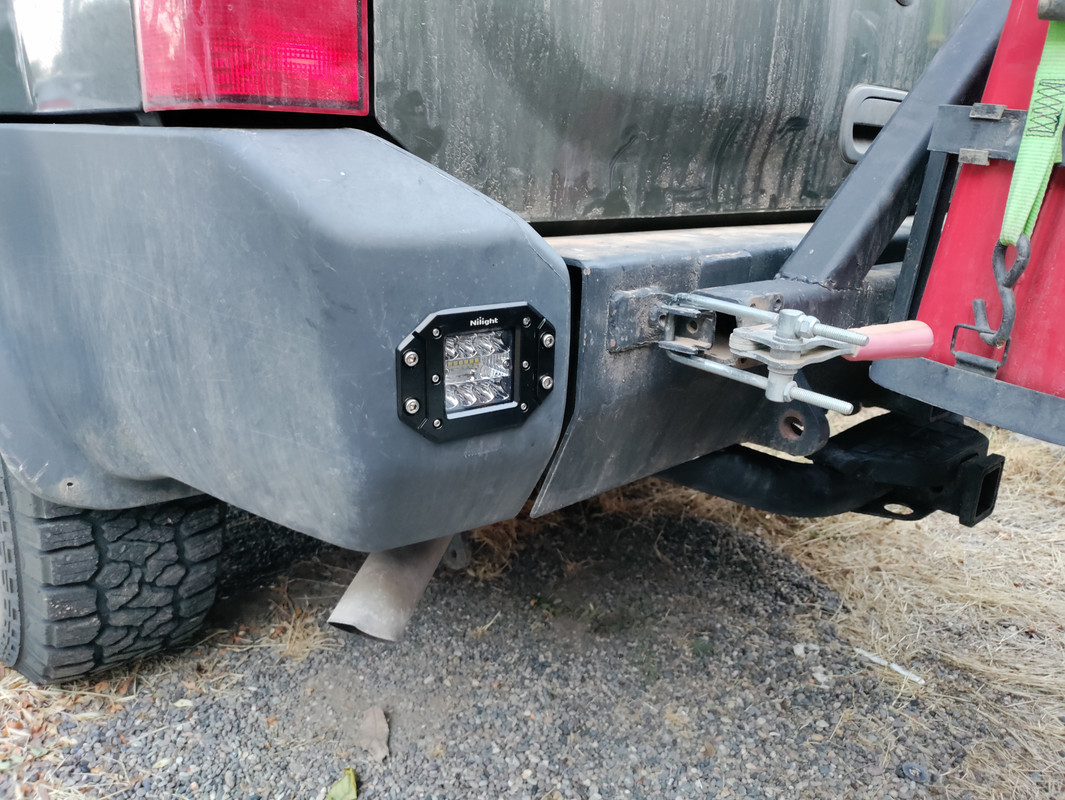 The last step was to build the 3-pin anderson harness to run the DC-DC charger in the trailer when I'm towing it.

Moved all the auxiliary wiring to the extra studs on the battery. 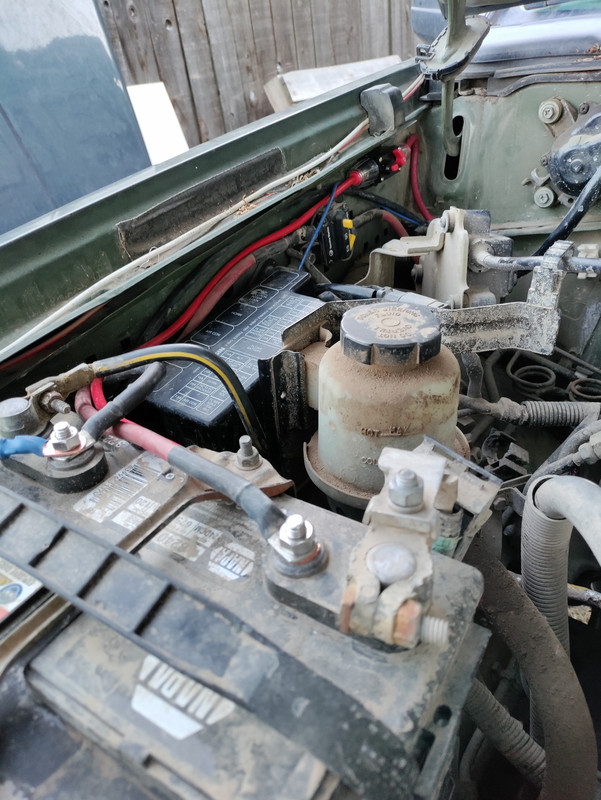 Ran it to a 30A breaker right behind the 100A breaker for my aux system: 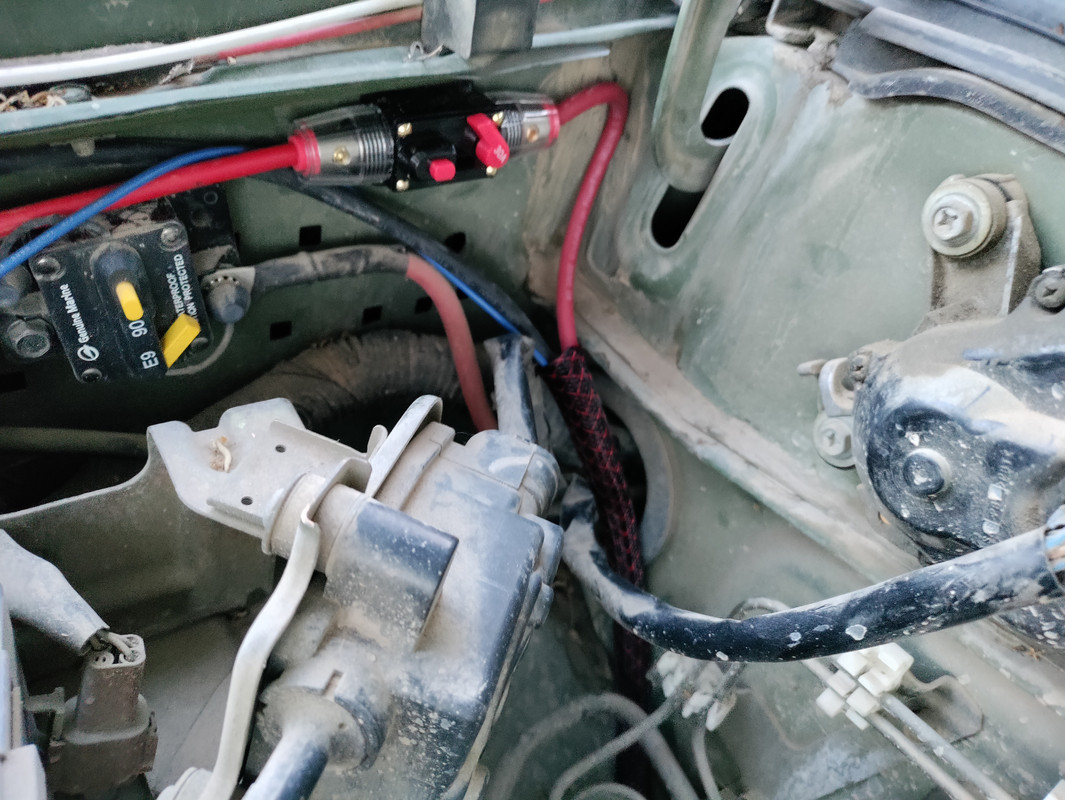 Ran the harness along the frame rails: 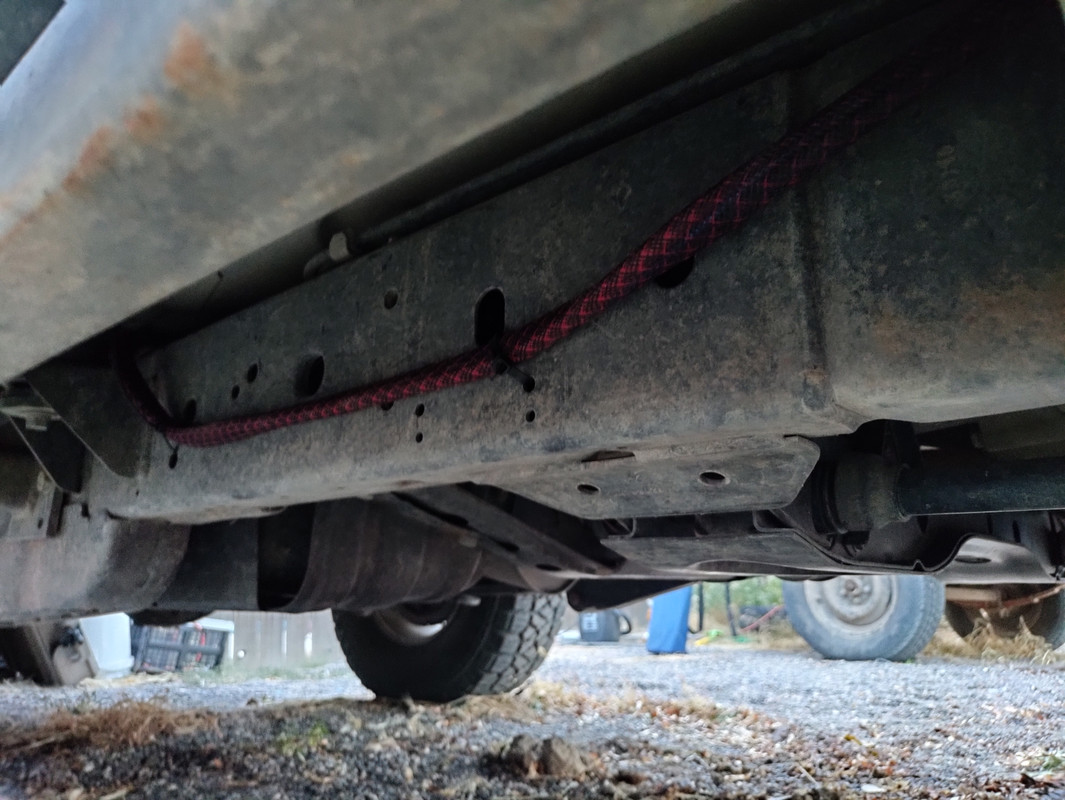 And mounted the plug to the safety chains mounts in the steel bumper: 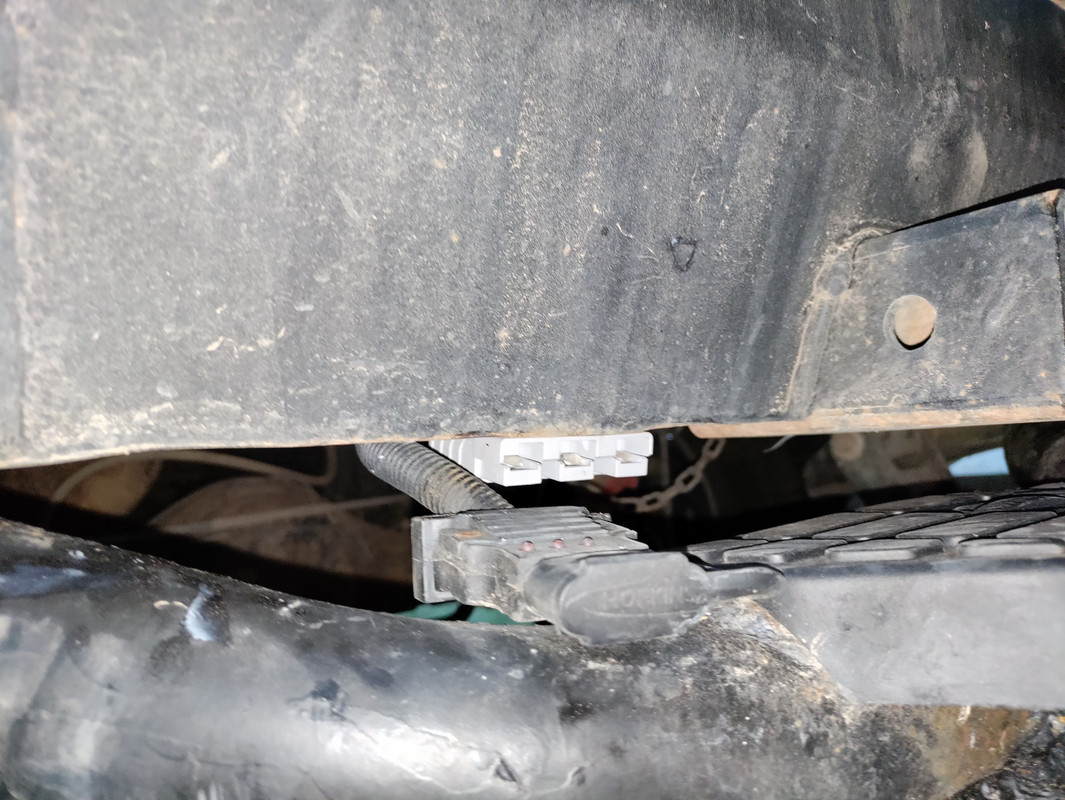 Got a few more things to try and knock out this week after work. I need to run the power for the backup lights through the passenger tail light grommet, and run new power and ground for the bumper light.

Backup lights are wired up and functional! 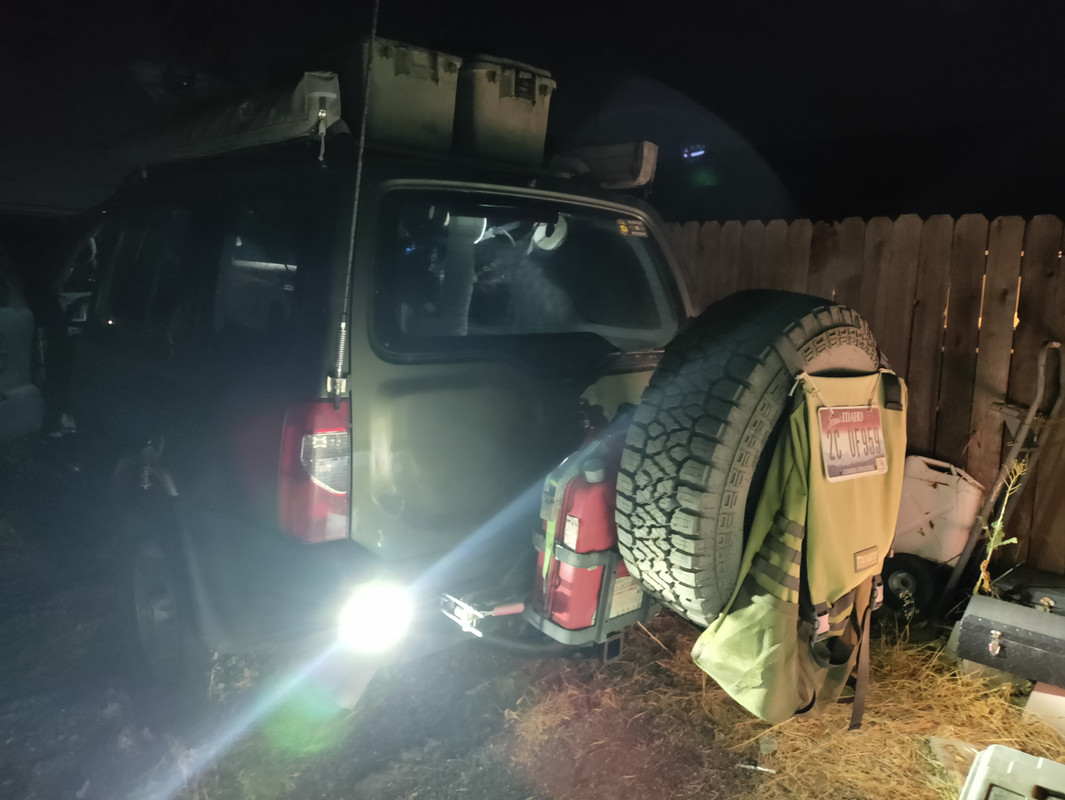 Ran new wires for the bumper light bar last night. It's now grounded to the same place it gets power, so it should work regardless of which battery it's pulling from.

Also work on figuring out where all my screens for monitoring cameras are going to go..... 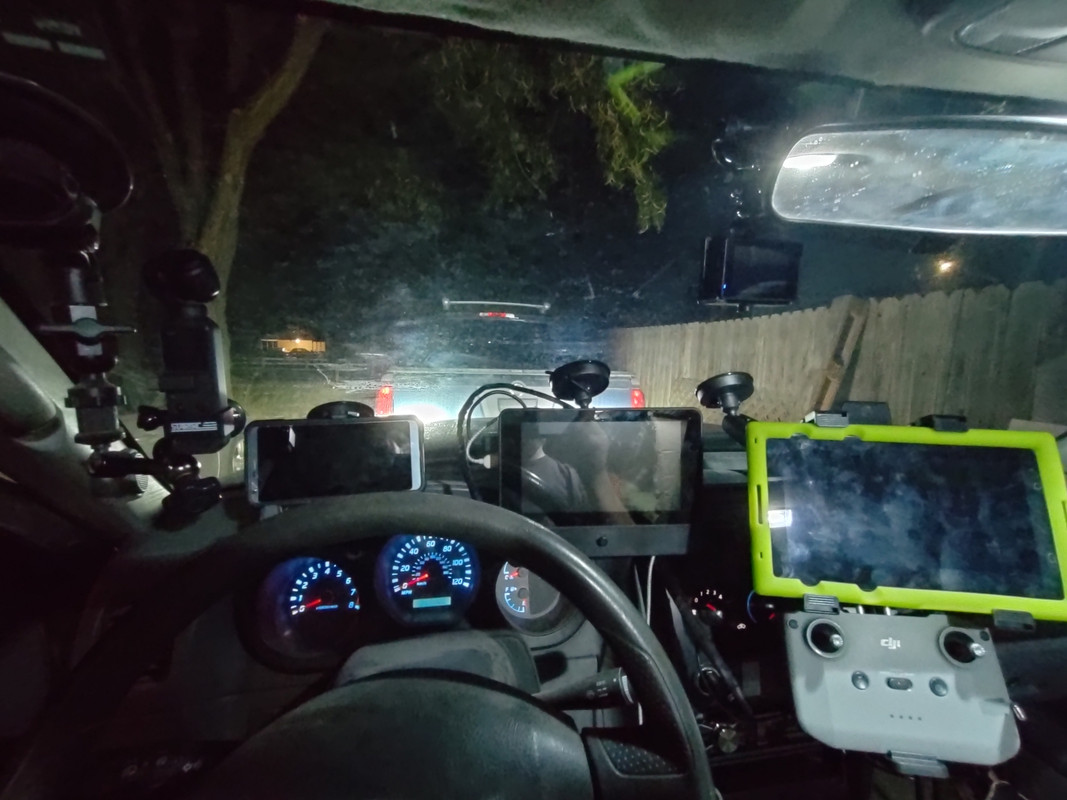 But, everything is out of my sight line, and it doesn't impede my vision in any way. We're gonna give this a shot.

I suspect I'm going to have to order a better ram mount for the dji controller. It moves around a bit due to the weight.

These screens allow me to view and control all my cameras. I have 3 action cameras, the drone, an osmo pocket.

The screen next to the tablet is my android auto unit that has navigation and music control.

Dude. That's possibly too many screens.

Yeah, there's a whole lot going on there. We'll see how it works out. I've done the phone + Android auto thing before, and that works well. We'll see how adding in the drone screen works.

In the meantime, I've been working on doing a clean redesign of my electrical system.

Going to be making everything modular using DT, DTP and Anderson SBS connectors.

This will be a winter project, and I'll bring the drawer system down into the basement and work on wiring everything up in the evenings. 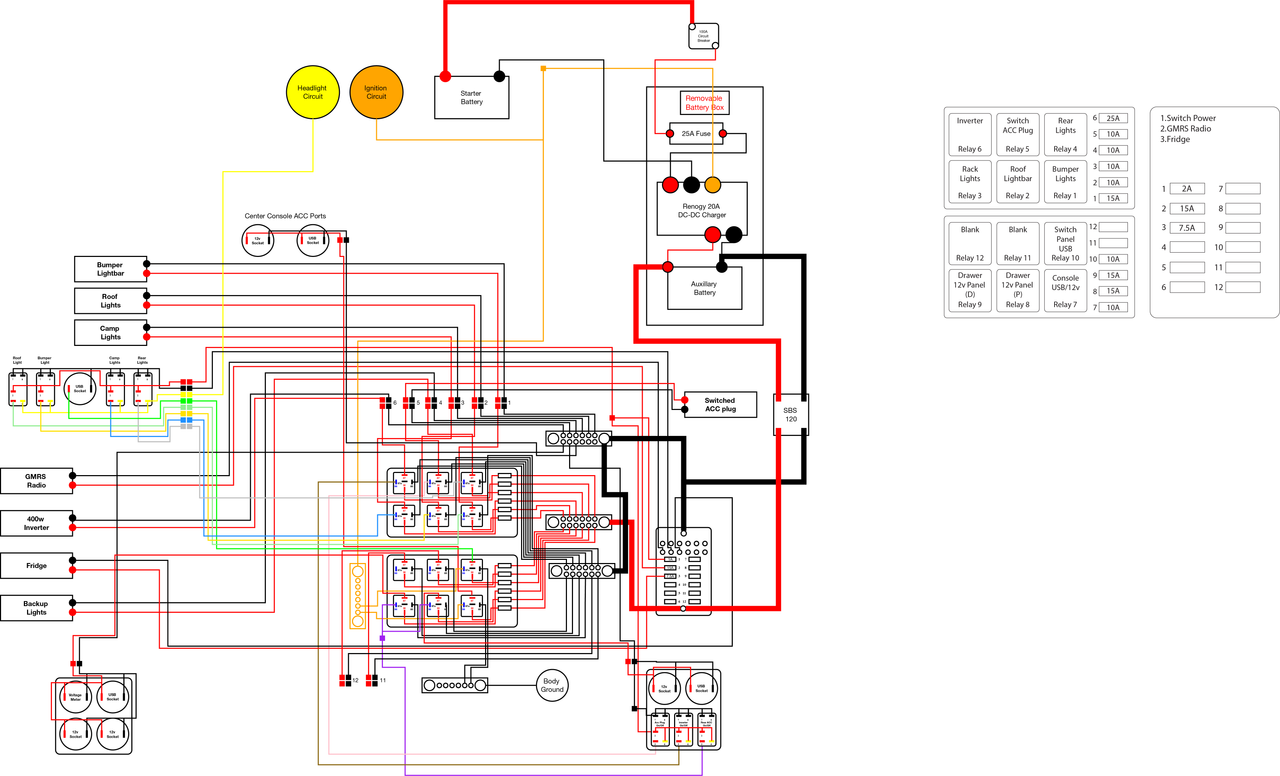 OK, much work this weekend, though most of it on the trailer, and the frontier.

I added some organization bags to the kitchen box. We'll see how they work this weekend, but I think once labeled and attached to the wall with velcro, it'll work quite well. 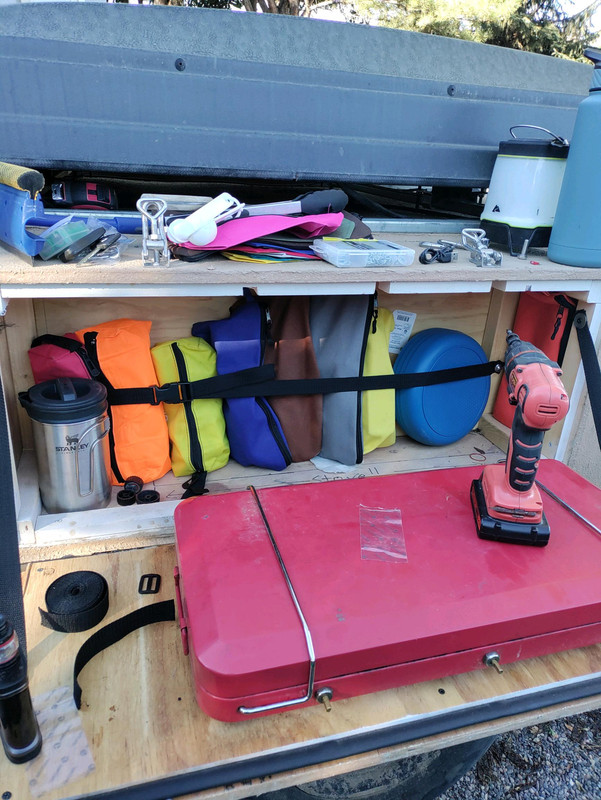 I also had to replace one of the plugs for the trailer camp lights.

I also tightened all the bolts that hold the box to the frame. The nuts had started to work themselves a bit loose. I had also drilled two additional holes per side when we built the box, but never added the bolts. So instead of 1 large bolt in each corner holding the box on, there are now 4 bolts per side holding it on.

I also noticed that the bolts that held the tounge box on had lost their nuts. Replaced all those nuts with larger ones, and added lock as hers to both sides. I'll keep an eye on it this weekend, and possibly replace with nylock nuts.

Then I put everything back in, and moved onto installing my auxbeam switch box in the Frontier:

First step was getting the switch cable through the grommet: 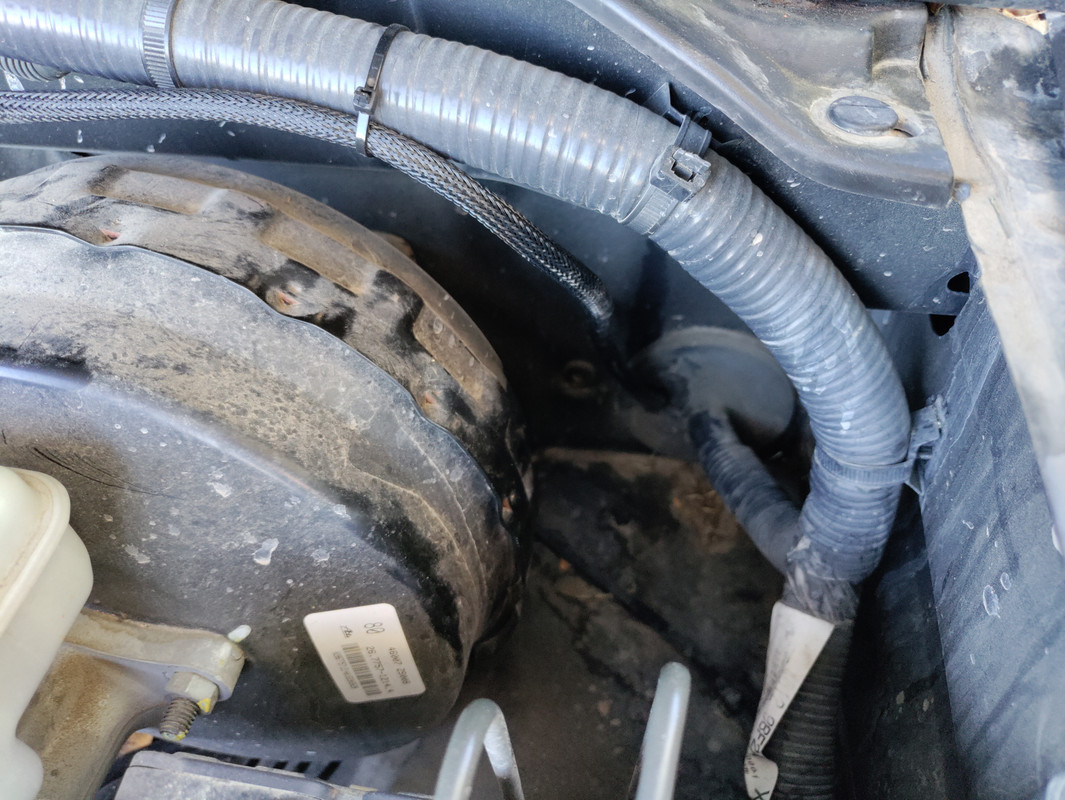 Then I made a bracket so that I can mount it on top of the OEM fuse box, at least for now: 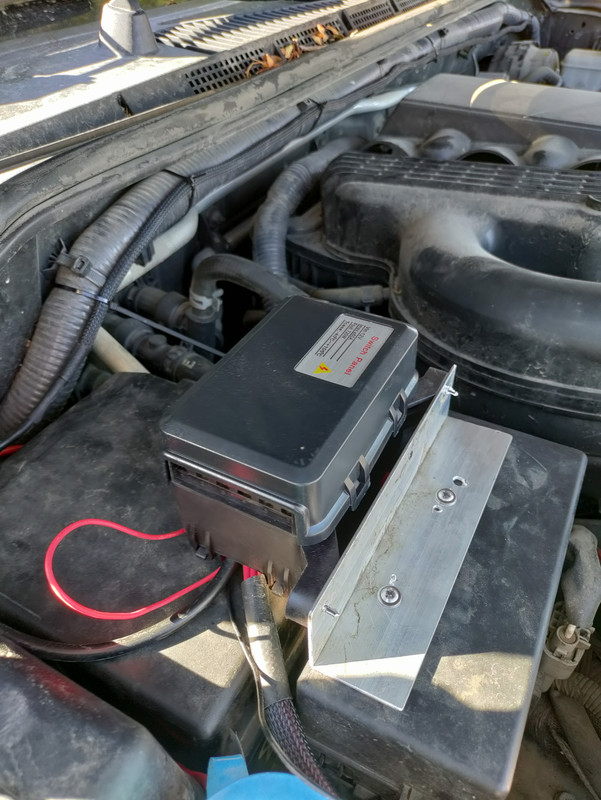 Zip tied the wires to the OEM harness along the firewall: 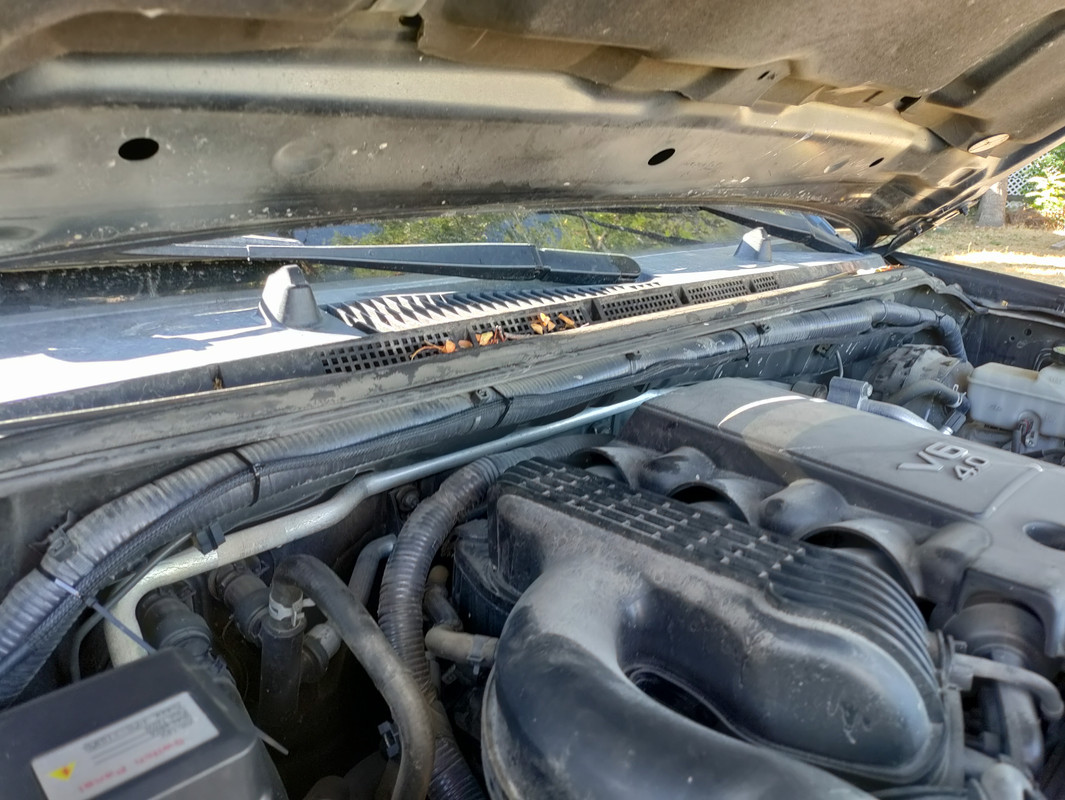 Last step was to get the switch panel mounted on the dash: 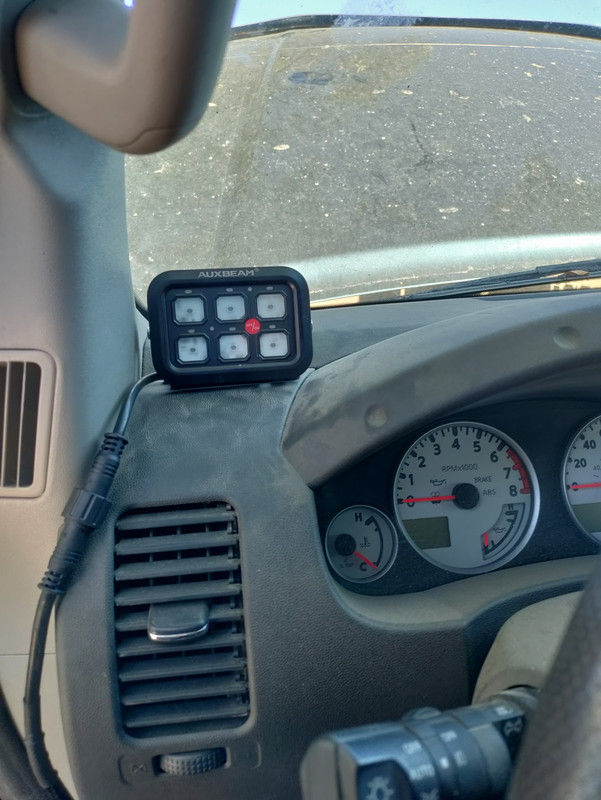 I guess I need to get some lights now....oh darn.

Ordering my supercharged radiator in the morning. Between that, and the auxiliary trans cooler, I shouldn't have to worry about this thing getting hot.

We'll see about the AAL after this weekend. I suspect I'm still going to want them to help handle the weight.

The last thing is my aux lights. For the front, I'm going to switch to a pair of 90W spots. I was going to do a set of high powered auxbeam spots, but then stumbled across these:

I dig the combo. True spot, a bit of flood, side shooters, and DRL. I figure that, plus a single row 32in bar up to for more flood should give me everything I need for night driving. Plus, I plan on adding some small cubes on the rack for helping to setup camp, since I have one more switch in the X.

I'll decide on what to do for the rear of the X after this weekend, but I have 3 options for the rear.

1. Adjust the shackles to get a little more height, but doesn't address additional weight

I also ordered a SetPower AJ30 fridge to keep in the X. I wasn't planning on picking it up this early, but it was on sale, so I went ahead and ordered it.