I wanted an awning for my Xterra, however, I did not want to pay out the rear for something I can get at Home Depot for $40. So I went to Home Depot (and Harbor Freight) to get my supplies.. shown below! 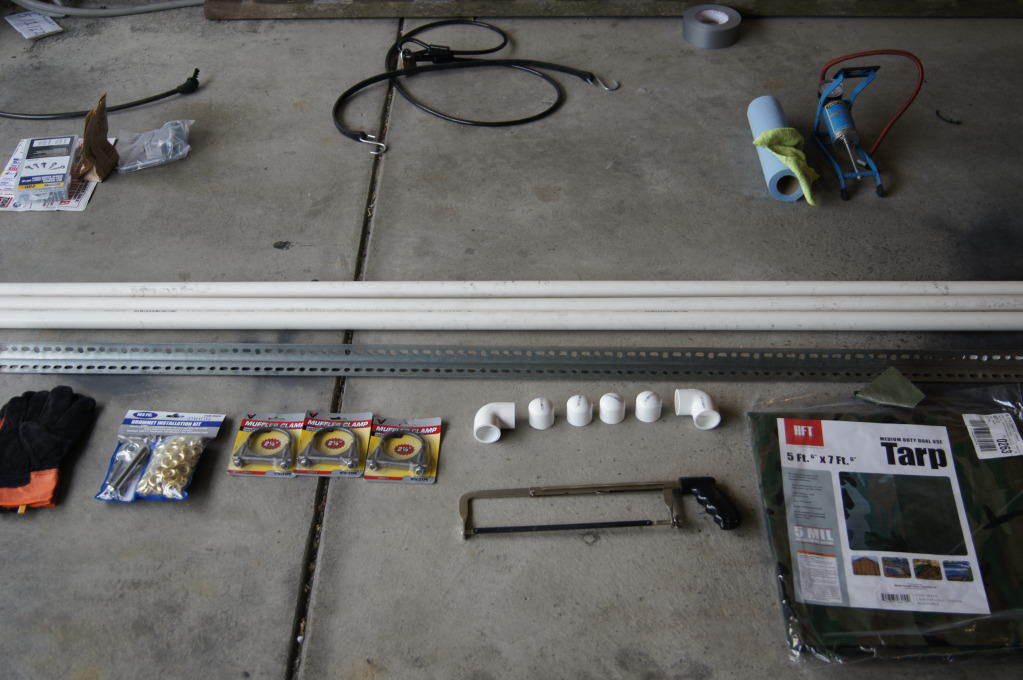 Take your exhaust clamps and put them on the roof rack. Put the back side on first, then add the steel rail to the front and tighten down the nuts. 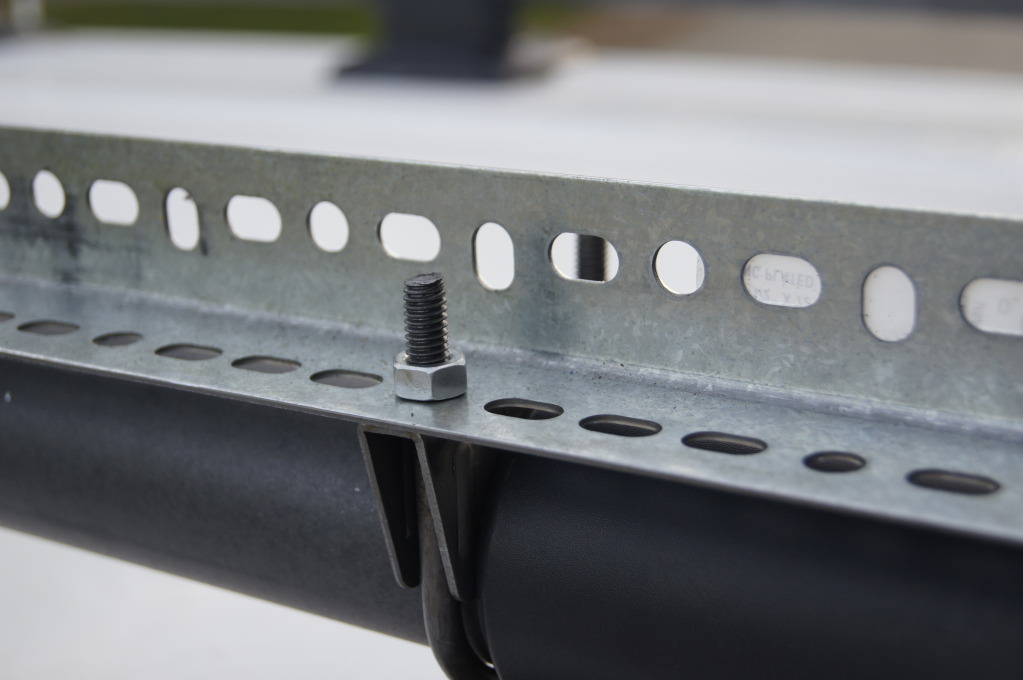 I went ahead and chopped the extra bolt off, because I want to be able to roll the tarp up an strap it down, and those would have gotten in the way. 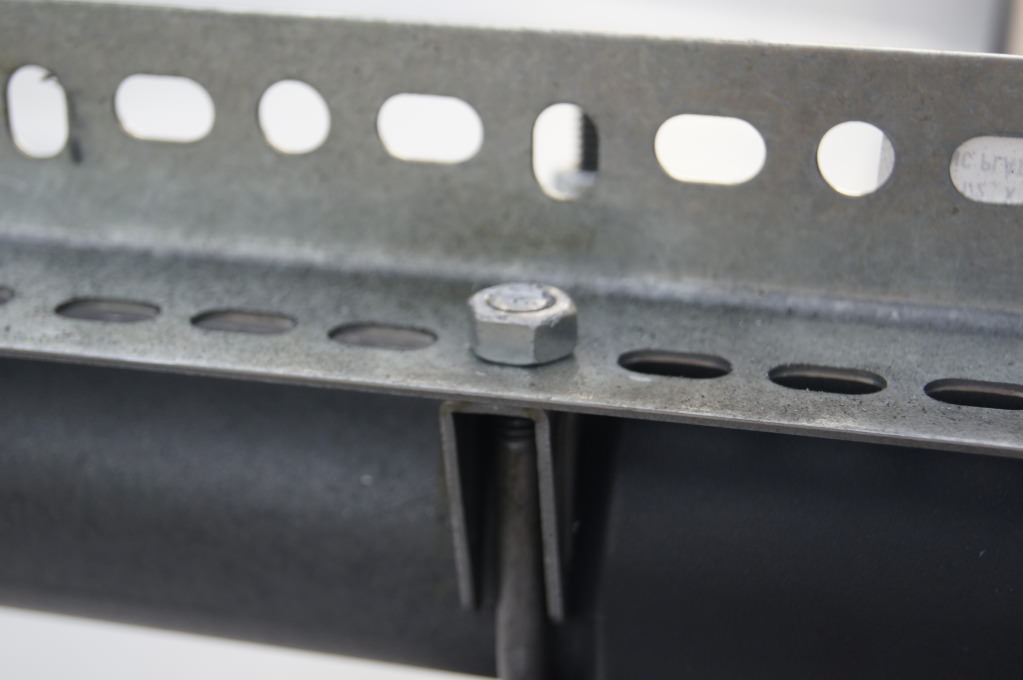 I then added more grommets to the tarp, because 3 on one side was insufficient. I did not get pictures of that because I hit my finger with a BFH. Once I got the extra grommets on I took some hardware I had left over from another project and bolted the tarp to the rail in 7 places. 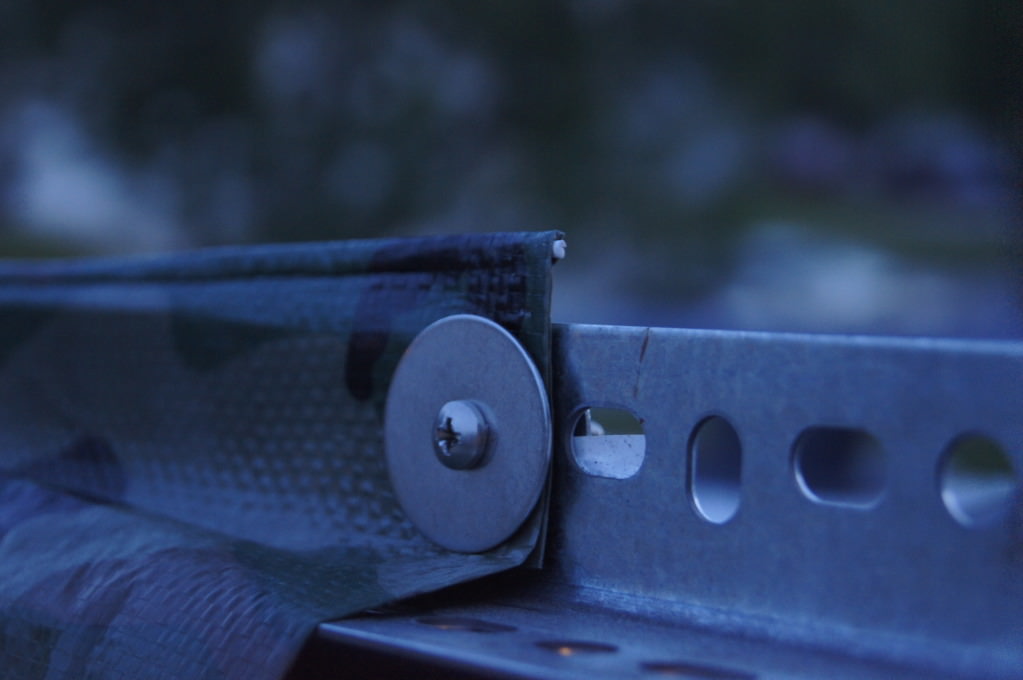 I cut a 6' piece of PVC, because that's how long the steel is. I zip tied that piece of PVC to the tarp. As you can see it added two sets of grommets on one side for that reason. Admittedly, I need to find a better way than zip ties but it will work for now. 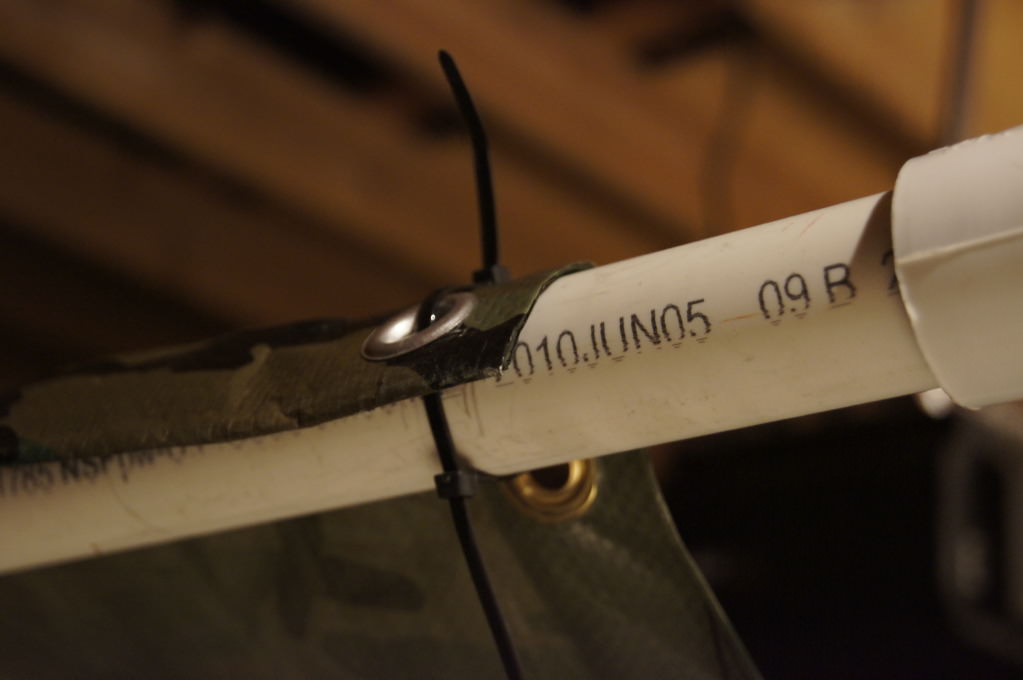 After that I added the 90* elbows to the PVC pipe, and cut two lengths of pipe that are 6'5" long for the legs. Once I put those on I set it up to see how it works! 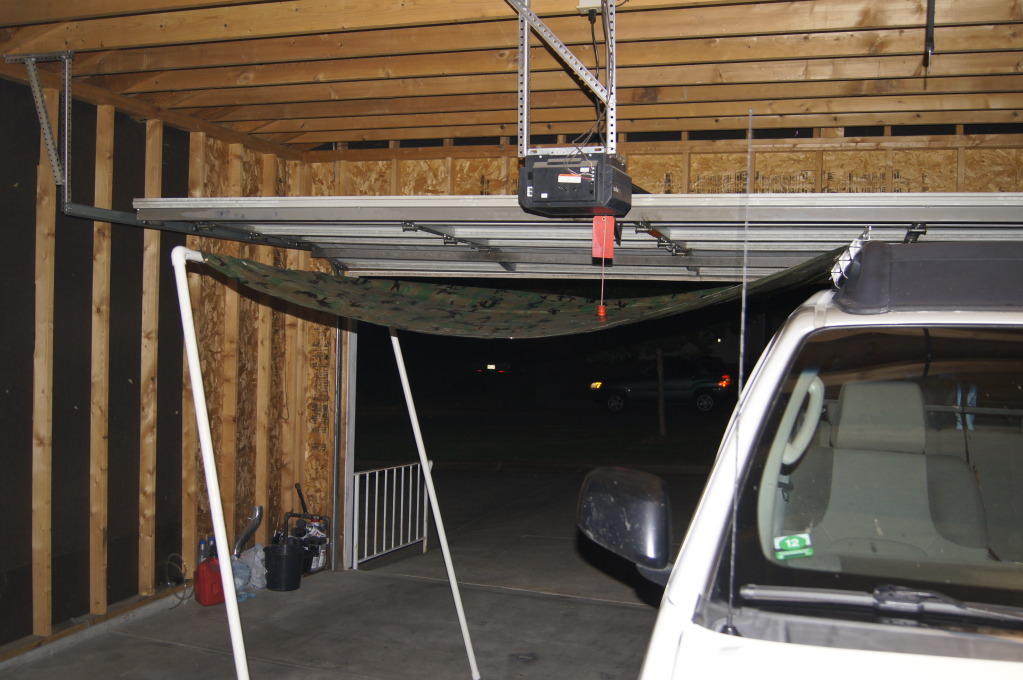 I'm going to get some paracord and stakes so I have anchors for it, but I didn't feel like running to the store again. Hopefully you all enjoyed this, and copy the **** out of this! I know you all going to Moab could use a nice awning for taking a rest in the shade after running some trails!

Oh yeah, here it is all rolled up! 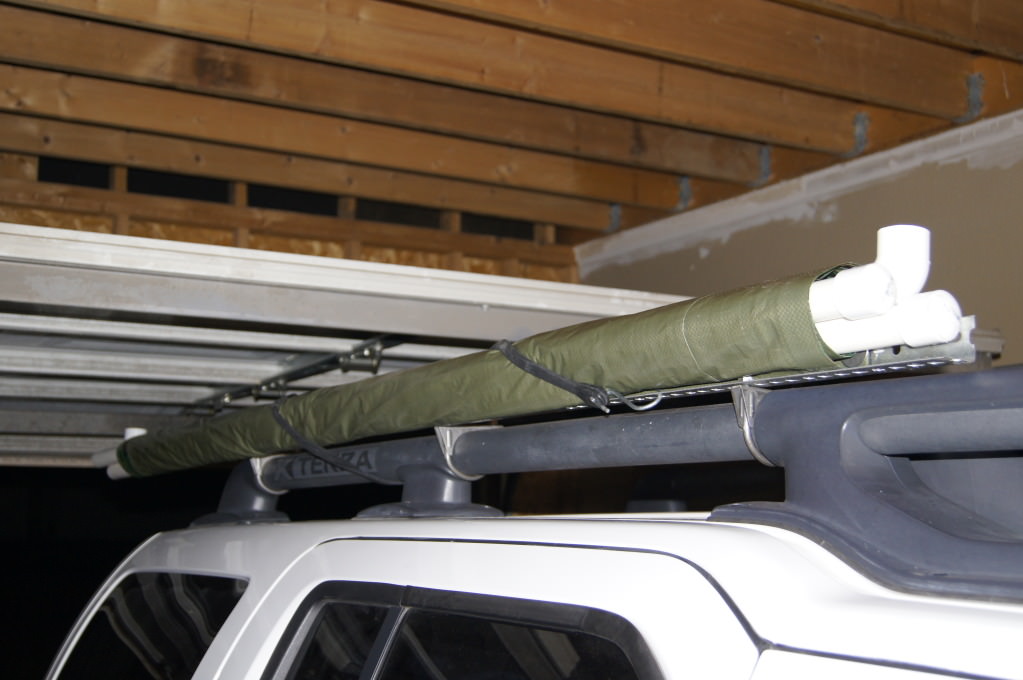 I've got something nearly identical to that, except for the muffler clamps and the shelf leg piece. I just tie the tarp grommets off to the roof rack rails. But your idea is solid; I like it. Good job!

Thanks! I like it, because its six nuts and then its off.

Love it! I have been thinking of ways to add an awning to the X.

I'll move this thread to a place it won't get lost. Stay tuned and thanks for your awesome idea.

Moved to the DIY 2nd Gen forum and copied it to the DIY 1st Gen... WIN!

Thanks! ^ I was debating getting an 8' shelf leg piece for more coverage but I think this is going to work out just dandy!

Here's what I have been thinking. Telescoping poles for the legs. I have seen painters poles used in previous awning projects.

telescoping tent polls work well also. that and they are pretty cheap to pick up.

Also I think that you should put poles that extend from the shelf leg to the pvc, putting tension on the awning (this is what we have on our camper)

Sent from somewhere by something

Roadwarrior said:
Also I think that you should put poles that extend from the shelf leg to the pvc, putting tension on the awning (this is what we have on our camper)

A couple of guy lines and ground stakes, as he mentioned adding, will put plenty of tension on it.

J Everett said:
A couple of guy lines and ground stakes, as he mentioned adding, will put plenty of tension on it.
Click to expand...

Sent from somewhere by something

^^ you had a good recommendation, I'm just going for as lightweight as possible.

I think I may try this....attaching it to my drop in rack too....great idea....though, if I do it, I'll probably run a set of poles that come back to the vehicle to keep it tight, and then line w/anchor it to the ground, I know that's how camper awnings are set up for a reason (less chance of wind ripping it up) and it's plenty windy here too. I've got another idea on how to anchor on the bar instead of the zip ties too, I'll try to get pics for you guys when I get it done.

I'm interested in doing this one too. I'm with dhyde though, plenty of wind here. This things gotta be able to withstand some serious wind.

here's my plot for the mod on the rod mounting.

1. take a piece of larger PVC to sleeve over the smaller one, mark a straight line down it, and pre-drill for screws. when you do this, get some screws that'll bite good into the PVC, but cut them off so that they won't protrude through the inside of the PVC. (I wouldn't worry about adding grommets to the tarp on the PVC end)

2. put the screws through the edge of the tarp where it's reinforced and thicker, about every 2" down the length of it. If you're really worried about it, do a second row, but, that should be unnecessary.

3. Drill yourself a hole through both pipes so that you can slip a "pin" through to keep the outer one from rotating once you have it extended, so you can rotate back and pre-roll a bit to put tension on the tarp so your awning is **TIGHT** and then put the pin through it and lock it in place

4. put the legs against the rack in a way that it doesn't come off easily...I'd suggest if you're going to have that angle piece, notch the bottom of the "legs" so that they'll slip onto there, but, after you notch it, make sure you reinforce the area above the cut so it doesn't split.

5. Drill through the 90* elbows large enough for a piece of paracord to go through cleanly, knot the paracord on the top side of the elbows, and glue it if you want to go the extra step for security.

6. Glue the elbows to the legs, not to the "roller" so that when you pull it down, you can wrap the paracord around the legs together, then place them in a way that they'll be wrapped up nicely.

7. Get the good metal "nail" style stakes to anchor it with, and, make sure you have at least 6-10' of paracord on each "elbow" so that when you're anchoring, you are doing so in a very solid way. the other option is to tie it back to your sliders instead of staking it, since the sliders will give you a good solid mounting place that lets you anchor the awning so it can't move. if you choose to go that way, make sure you're doing it in a way that you won't be blocking access to the doors if needed.


I'll try to get this worked out with pics at the end of next week or middle of the week after. I'm just waiting on funds and my camera that I'm ordering to come in. this will come in fantastically on vacation. I may even go so far as to make it into a "tent" mod...run a tarp down each side and anchor them together, not worried about it being totally sealed, but, with that setup, I could EASILY have a changing room or just a place to crash anywhere that's quickly attached to the X...if I go that route, I'll probably make additional "panel" style sides that get held in place with a retaining bolt or pin or something like that. Maybe a T in the back before it contacts the side of the X so that the side/side against the X can be put in easily, and one out at the elbow too for the "front" of the "tent"...the sides could be slide on like the top piece...

Thanks for this idea, now I'm REALLY running with the idea, and will have to report back with what I end up with.

I just want to thank you for such an awsome idea! I am getting ready to leave for a long weekend of camping and riding and this will work perfect. I went today and bought a few items and this is what I came up with. I really dont need it to be attatched all of the time so I didnt use the same materials. My items were bungy straps, tarp clamps, rope and canopy poles. (these poles are at walmart for $11.97 each. Since I bought a wider tarp then the roof rack we just added some wood strips for something to strap to. It is sortof windy today so its not as tight as it will be tomorrow. This was just temporary so I could see what it looks like.
My son says we will look like rednecks but he isnt the one paying soooooo......lol 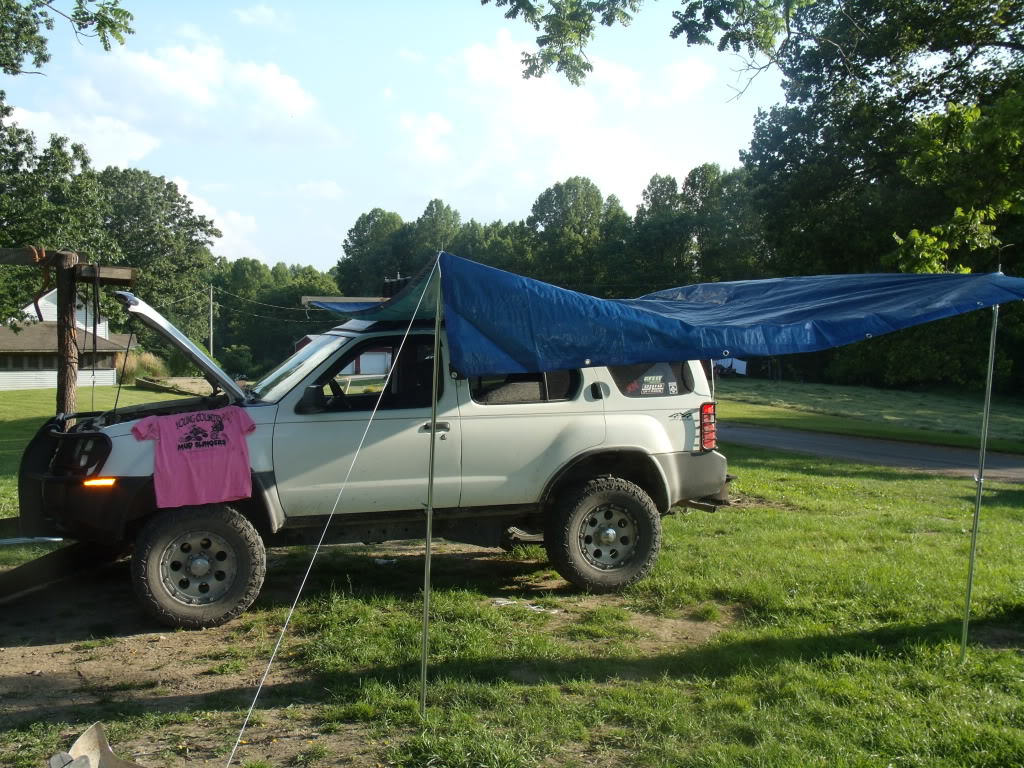 Not a darn thing! We will be covered in mud (or dust) all weekend with about 10,000 others so I seriously doubt we will be out of place! I have seen some pretty crazy contraptions (?) there...Im guessing the other Xterra owners will want one too!

Great idea, I think I will do this.

I like it and will use it. That is awesome.

This is what I have been wanting to do with my Xterra. In a SHTF scenario where I have get the hell out of Dodge, my Xterra will also act as my shelter.

I'm glad people are finding this useful! I need to buy a new tarp, mine ripped off pulling in to the garage the other day.